In spite of comparatively hostile terrain, the vast size and latitudinal variations above sea level of 1, 700m of Rajasthan provide varied vegetation and a number of mammals and birds. The sanctuaries are an isolated landscape with some backdrops to attract herds of species from all over to their temporary habitat and provide them comfortable subsistence. 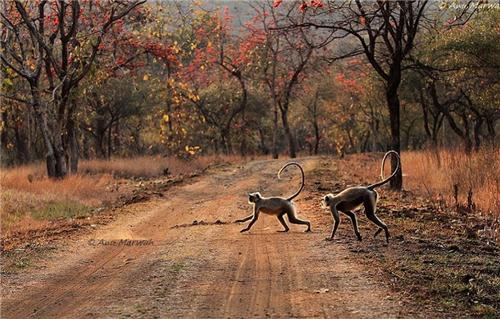 Ranthambore national park, a wildlife sanctuary in Jaipur, is situated in the eastern part of Rajasthan. The park comes under the district of Sawai madhopur. This place is the nearest town of the park that is just 11 km away from the park.
The climate conditions vary drastically in the park with a 2 degree centigrade of mercury level in winters and up to 47 degrees centigrade in the summers. You can see Ranthambore Fort and Jogi Mahal in the park complex. The other nearest attractions include Bakaula, Lakarda, kachida and Anantpura.
The park that covers around 392 sq-km is best seen during the months from October to March and April to June. Even though Ranthambore is a relatively small park, it includes different types of flora and fauna like 300 trees, 50 aquatic plants, 12 reptiles and 272 birds and several fishes etc.
If you travel to Ranthambore wildlife sanctuary, the nearest airport is at Jaipur which is 145 km away from the park. The Sawai madhopur railway station that lies on the Delhi to Mumbai trunk rode, is the nearest railway station to the park with around 11 km distance.

Sariska park, even though is larger than Ranthambore, is less commercialized and has less tigers. The park, which covers an area of around 800 sq km, is situated just 107 km from Jaipur and 200 km from Delhi. This area was declared as wildlife sanctuary in 1955 and became a National Park in 1979. The Northern Aravali Hills along with their mixture of sharp cliffs and long narrow valleys dominate the skyline.
The seasons of Rajasthan here is erratic as well as variable and so we can see a wonderful ecological adoption and tolerance here with the broad range of wildlife. The nearby kankwadi Fort, which has a long and turbulent history and pavilions and Temples are the ruins seen here, which hint at past riches and glory of the state.
Wildlife in Sariska heads towards numerous water holes in morning and evening, which litter the park and offer the visitors with their best chance of viewing game. Visiting Sariska from October to April is more advisable, even though it is open almost whole year-round. Safaris are provided by jeep here. 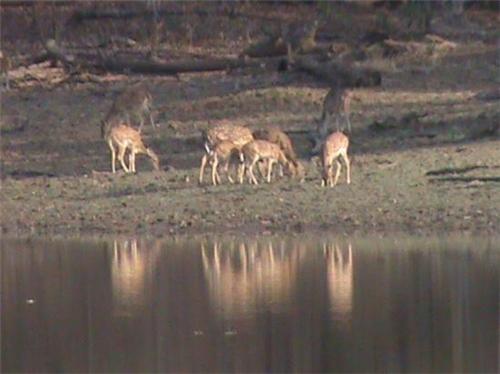 species as well.
Besides indigenous water-birds, migratory birds and waterside birds, you can also see Chital Sambar, Nilgai and Boar at this wildlife sanctuary in Jaipur.
This park that includes around 300 species of birds also possesses an ancient Hindu temple devoted to Lord Shiva.
The migratory birds that come as far away as Siberia and Central Asia, spend their winters in Bharatpur and return to their breeding grounds are the major attractions of people who visit the park.

Ramgarh Lake is a wildlife sanctuary near Jaipur, which is located just 25 km from the city. This huge man-made lake is best seen during the months between October and March. The ruins of an old fort and the Jamwa Mata temple for a backdrop make the lake a scenic spot. Ramgarh Lake, which spans an area of around 15 square kilometers, is in its prime after the monsoons.
The other popular wildlife sanctuaries in Jaipur are Bund Baretha, Sawai Mansingh, Nahar Garh, Kela Devi, Sheer Garh, Jawahar Sagar, national Chambal, Ramgarh Vishdhari, jaisamand, Bhainsrod Garh,  Phulwari Ki Nal and Bassi, etc.