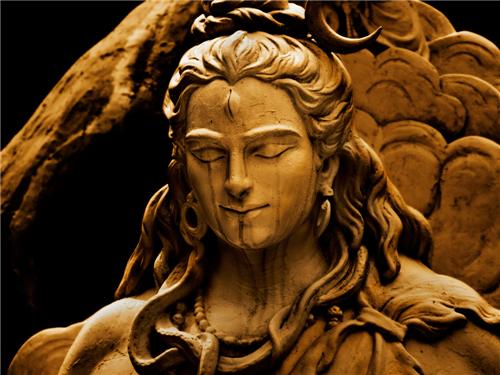 This oldest and popular temple is however neither architecturally breathtaking nor is there any scenic beauty surrounding it. At the heart of this two century old temple is of course the Shiv Lingam, which bears typical black color and is exactly of 9 diameters.
Apart from this Holy Lingam, there are other sacred features to this Lord Shiva Temple, which have equally contributed in making this temple an important spiritual abode of the city. Amongst them the most prominent one is small Ganesha temple located in the adjoining Jagmohan Hall.
Its prominence is less to do with its beautiful sculpture and more to do with the fact that it is amongst the rare Ganesha idol whose trunk is directed to towards left side. Any Ganesha idol with this rare trait is considered very auspicious and hence this humble & unassuming idol attracts equally huge number of devotees.

Another very prominent and indeed very sacred structure is the huge bronze color Nandi bull, which stands at the very entrance of this temple. Shiva devotees adherently bow their head in front of this Nandi bull, as Nandi is considered as ox of Lord Shiva.
Apart from its sacred importance, bull is also visual treat to watch and lends a very aesthetic beauty to temple complex. And there are few other small temples too in this temples vicinity, including lord Hanuman temple which equally draws huge number of devotees.