Surya Temple or Surya Mandir is 2.5 Km away from the centre of Jaipur city. It is also part of Galta Ji temple that is situated in the west of Jaipur city. The temple is dedicated to Sun God and was built in the 18th century. This was the private temple of the courtier of Maharaja Sawai Jai Singh II and situated on a small hill. From the hill, the tourists can have a breathtaking view of the sunset as well as the Jaipur city.
It is also one of the famous tourist places in Jaipur and devoid of hassles such as beggars or peddlers or touts. 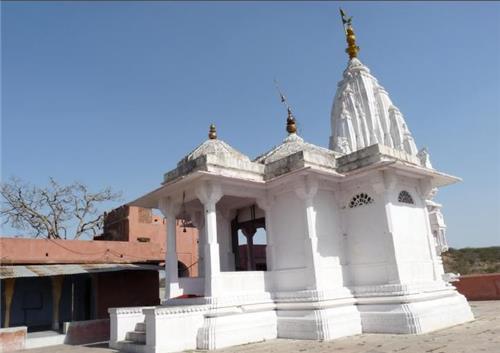 To reach the temple, the tourists need to travel through Surajpol Bazaar and they need to take the intertwined path of 200 metre on the hill to reach the temple. From the Galta temple complex, the Surya Temple is connected through rock climbing route. It takes 15 minutes to reach the Sun temple and the Galta Ji temple (or monkey temple) should be visited first.
The temple does not charge any entry fee but it accepts donation. It takes 60 minutes to visit the sun temple which also includes the 15 minutes walking up to the temple. Surya Mandir or Sun Temple is also the ideal name for this place as the whole city is bathed with shining sun right from the sunrise to sunset. It also provides stunning view of the city from distance.
This temple is built by Diwan Kriparam and is ideal for those who believe in the spiritual power of the temple. It is also to be noted that this is the only temple of its kind that is available in this part of India.
There is also a kund situated in the eastern side of the Surya Mandir and the kund is filled with pure and fresh water that falls from goumukh. The tourists will also find separate water tanks for both men and women. The entire place is situated amidst the rocky hills. The water of the kund is considered to be sacred and during festivals many pilgrims take a holy dip in the divine water.
Read More Jaipur city, 3 Star Hotels in Jaipur, 4 Star Hotels in Jaipur, 5 Best Art Galleries in Jaipur, Aadhar Card Centers in Jaipur, About Jaipur, Jaipur Lodges, Administration in Jaipur, Trekking and Camping in Jaipur, Albert Hall Museum in Jaipur, Amber Fort Jaipur, Anokhi Museum, Apano Rajasthan, Azim Premji Foundation, Bagru Industrial Area, Birla Planetarium in Jaipur, Best Flea Markets in Jaipur, Fashion Boutiques in Jaipur, Jaipur Foreign Exchange, Labor Court Jaipur, Jaipur Literary Festival, Exhibitions in Jaipur, Pink city, Markets in Jaipur, Jaipur Literature festival, Moti Dungri, Culture In Jaipur, Hawa Mahal, Best Places to Shop in Jaipur, shelter to old age people, Monuments in Jaipur, Food in Jaipur, Shopping Malls in Jaipur, Jaipur Airport, Temples in Jaipur, Sawai Mansingh Cricket Stadium, Nahargarh Fort, Jaipur Metro Rail Services, Pushkar City Guide, Nahargarh Fort, Rajasthani food, Jaipur airport, major tourist destination, Sanganer Airport, Birla Temple,Police stations in Jaipur, Rajasthani culture,Galtaji, Mewar festival, Marwar festival, Luxury Hotel in Jaipur, Hawa Mahal, Jaigarh Fort, Nahargarh Fort. Chokhi Dhani, Ranthambore National Park, Temples in Jaipur