One of the most iconic cricket stadiums present in India is the Sawai Mansingh Stadium in Jaipur – built during the illustrious reign of Maharaja Sawai Mansingh II. Located near the Ranbagh Circle in Jaipur, with a seating capacity in excess of 30,000, the stadium has been one of the perennial seats of Indian cricket in the recent times. 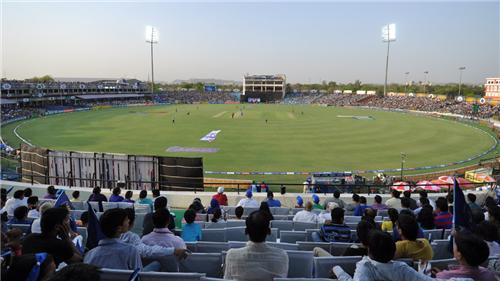 Brief perspective of matches played in the stadium

It was with a touch of grandeur that the Sawai Mansingh Stadium in Jaipur got to host its first international match, way back in 1983, when India and Pakistan locked horns in a One Day International, shortly after the conclusion of the Cricket World Cup 1983.
The match is etched in the memories of most cricket fans, as India managed to vanquish Pakistan without much ado, riding high on the confidence of winning the all important World Cup just a few days ago.

The only Test match that the stadium has hosted so far, in the course of its chequered association with Indian cricket, was replete with many a historic moment. It was in February 1987 that the same pair of India and Pakistan, which had inaugurated international cricket on this ground four years ago, came together for a 5-day affair.
Sawai Mansingh Stadium is also among the few stadiums in India which have had the blessed fortune of hosting matches during the World Cups – once in 1987, hosting West Indies and England, and then in 1996, accommodating West Indies and Australia..

Records made on this ground

As a dessert for the readers, we present here a list of records and achievements which teams and individuals have garnered at this ground –