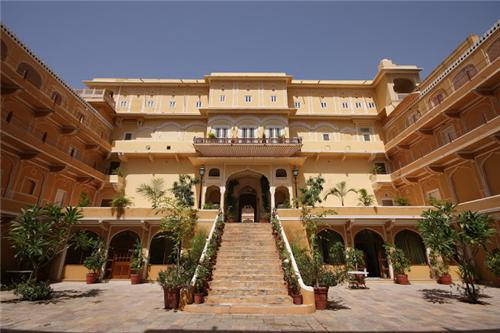 Credit goes to innovative ideas of Rajasthan Tourism which had launched an initiative for converting some of the royal palaces into premium hotels for adding new dimension of royal hospitality of Rajasthan. Samodee palace in Jaipur is one such royal palace which is presently in use as a luxury resort under Heritage group of hotels.
There are three parts of this historical construction and these three are Samodee Palace, Samode Haveli, and Samode Bagh and all three together is called Samode Palace, Jaipur Unit. Samodee Palace is located almost 40 km away from Jaipur city and right now is being used as a luxury hotel.
Constructed under instruction and patronage of Maha Rawal or Maha Saheb these three buildings are considered as part of Rajasthan’s Heritage monuments.

Samode Palace, Jaipur was built during 16th century and initially it was a Rajput Fort. However, during early 19th Century, esteemed personality of contemporary Rajasthan, Mr Rawal Berisal took some initiative about the old fort and converted it into an exquisite palace.
The architectural design was a grand combo of Mughal and Rajputana Gharana. Mr Rawal Berisal was the chief minister of Rajasthan, and he took special interest in extending the palace and added two specially made new constructions there.
One is Sheesh Mahal, and the other is Darbar Hall. The first one, as implied by the name, is made of exquisite glass design and the second one was massive hall for conference. The wall and ceiling of this royal hall was completely hand painted. In the year 1987, the palace was converted into Samodee Palace Hotel.

The Samode palace is located near Samode village at the outskirts of Sekhawat, at the hilly terrain of Aravalli mountain range. Out and out made of white sand stone the palace is built with the shape and structure of a Rajasthan fortress.
The interiors of the palace look awesome with Rajasthani architectural style, the combo of ornamented pillars, mosaic made walls, with elegant carpets, and decorated with old oil paintings made of hunting scenes, floral motifs, etc. 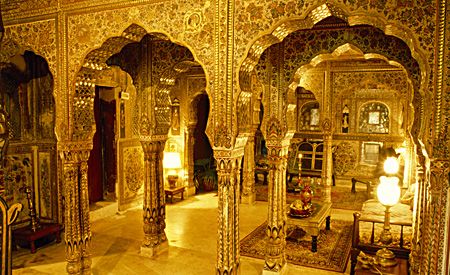 The entrance gate of the Samode palace is found decorated with a big sized treasure dark wood made chest embossed with marble settings and gleaming glass. The Sheesh Mahal is positioned at the southern side of the palace.
There are many frescos on the durbar hall wall and it is anticipated that Sultan Mahal of the Samode Palace is more than 250 years old. The palace is built on three levels and these are planned in an arrangement of courtyards of ascending height.
Each of the floors is built with a patio. At the topmost floor of the palace, a watch tower was built which has become almost ruined now, and from here visitors can enjoy a panoramic view of the area surrounding the palace.

Samode Village is the neighboring area of the palace. It is popular for its block printing and folk handicraft like bangle making. A small artist colony is found at nearby place from the village where miniature paintings are made. Tourists often visit this place for enjoying a nice local flavor of rural Rajasthan and its local handicraft.

Samode 'Haveli' is a  big house built in the 'fort' style and was in use for arranging royal marriages during 1940. The 'Haveli' is a sure-visit for its opulent, Mughal culture inspired interiors at the contrast of the contemporary, Hindu setting which has generated a spectacular view to witness.