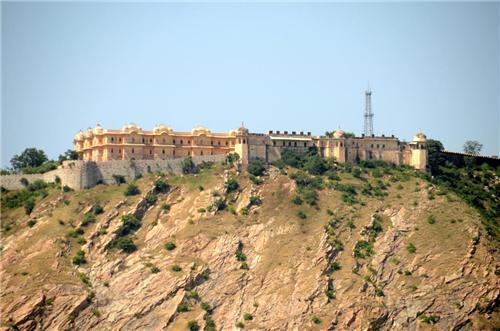 Jaipur was one of the prime cities of Rajasthan, especially for Rajput Dynasty, in terms of defense and administration. There were three prime forts in Jaipur and Nahargarh Fort was one of these three forts, which were accounted one of the prime centers of Jaipur for its royal army base. Situated on the hilly terrain of Aravalli Hills, this fort was also known as Tiger Fort.

The fort was built by Maharaja Sawai Jai Singh II in the year 1734. As per local history, the construction work of the fort was hampered initially because of the ghostly activities of the spirit of a Rathore Prince, named as Nahar Singh Bhomia.
After a long struggle the spirit was pacified and in order to keep him pacified forever a temple was built in the fort premise and was dedicated to him. The Fort was renovated in the year 1868 by Sawai Ram Singh.During 1880s Maharaja Sawai Madho Singh reconstructed the Fort again and built an amusement citadel inside the fort.
The building was named as Madhavendra Bhawan. Contemporary famous architect of Jaipur Vidyadhar Bhattacharya designed the wall, interior, and decors of this new Madhavendra Bhawan, which are still outstanding for their exquisite decorations.

Architecture of the Nahargarh Fort

The fort was mainly constructed on Indo European style of architecture and that is the reason behind its airy interior. Apart from other assorted buildings within the premise, there is a two storied building exclusively allotted for king and queens’ residence.
This building was divided into nine apartments and each of the apartments was equipped with bedroom, kitchen, lobby, store, and toilet, respectively. There was an open air enclosure with the fort which was names as Diwan-I-Aam, where the king used to meet his visitors, and sit for addressing the issues related to common people’s grievances for offering justified solution.

Important events related to Nahargarh Fort
Surprisingly, Nahargarh Fort was never intruded but it witnessed some significant events. For example, the royal member’s took part in the treaty between Maratha and Rajputs, Sepoy Mutiny etc.

Tourist Attractions Around the Fort

Some of the most popular tourist spots of Jaipur are located at close proximity of this fort. Around 2.5 km away from the fort, Jantar Mantar , one of the prime five astronomical observatories in India is located. Other famous spots located nearby the fort are Hawa Mahal, Jaigarh Fort, Jalmahal, and Amber Fort.

Nahargarh Biological Park is another popular tourist attraction located at immediate neighborhood of Nahargarh fort. This is an organic park, stretched up to 7.5-sq-kms of the Nahargarh sanctuary (48-sq-kms).