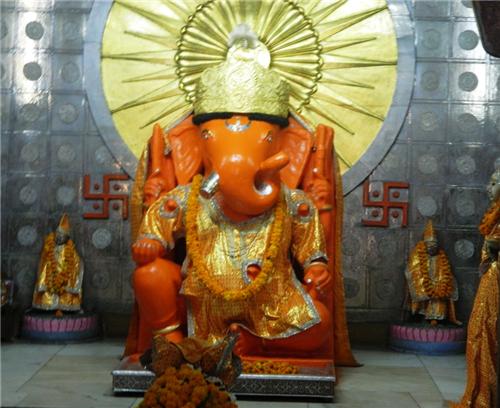 Moti Dungri is one of the iconic landmark places of Jaipur. It owes its coveted status of being an iconic landmark place to two immensely sacred temples of Jaipur city, which today are also amongst the most visited temples of entire Rajasthan state. These two sacred temples are namely Moti Dungri Ganesh ji temple and Birla temple, located at the very heart of Moti Dungri.
The vivacious spiritual aura exuded by these two temples literally grips you the moment you enter the vicinity of Moti Dungri. And when these positive spiritual vibes mingles with scenic surrounding nature, the effect is absolutely magical to say the least.
Both these famous temples of Moti Dungri are absolutely poles apart in every sense. In sense of history, architecture and of course the fact that while one temple is located exactly at the base of Moti Dungri hill and other is perched at the top of the hill.
At the bottom is the pristine white marble architectural Birla Temple, which was constructed or came into being at this iconic place only in late 1980’s. Dedicated to Lord Vishnu and his consort Lakshmi, this is the only temple in entire in Jaipur that has been constructed in pure white marble.
Its sheer white marble architecture standing in the midst of scenic nature indeed has a divine effect on devotees. If anything it simply takes their breadth away. And perched at one of the hills of Moti Dungri hill is of course the famous Moti Dungri Ganesh ji temple.
The Idol of lord Ganesha placed obviously inside this temple also has a very auspicious feature to it. Unlike most other Ganesha idols, Moti Dungri Ganesha idol’s trunk is not directed towards right hand side but left hand side.
There is another very remarkable feature to this temple, which surely deserves a mention, as it is in fact one of the USP’s of this famous temple. It is the exotica historical palace which literally surrounds this temple and in fact makes the visiting devotees nostalgic about Jaipur’s bygone royal era.