Situated in the middle of the Jaipur city is the small hill called Moti Doongri which means “pearl hill”. This hilltop is privately owned by B M Birla foundation who constructed the fort like a scottish castle. Until few years back, this remained as a private property.
The exotic palace was occupied by the son of Maharaja Madho Singh. During recent past, it was the home for Rajmata Gayathri Devi as well as her estranged son. The castle provides an exotic view to the tourists.
Apart from the castle, the Moti Doongri is also quite famous for the Ganesh Temple. For any auspicious occasion, the first invitation goes to the Ganesh temple which is flocked by several tourists from Jaipur as well as from other parts of the world which makes it an important religious structure of Jaipur.
Every day the Lord Shri Ganesha is beautifully decorated with new clothes. The beautification of the temple is done with the stone carvings throughout the temple. All the deities of the temple are made out of marble. 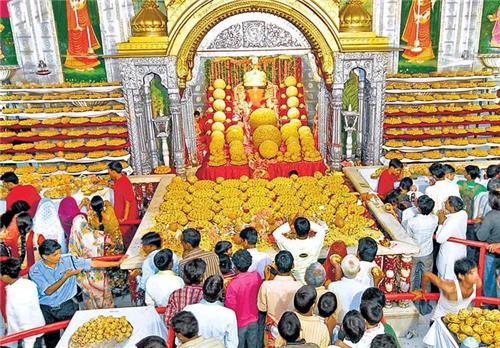 According to the local legend, the King of Mewar was returning home after a long journey and he was carrying the huge Ganesh idol with him and he was determined to construct a temple wherever the bullock cart halts for the first time.
The bullock cart stopped at the foot of Moti Doongri hill and he engaged Seth Jai Ram Paliwal to construct/supervise the Ganesh temple and the construction took place under the guidance of the chief priest Shiv Narain Ji. Though earlier only Shaivites visited the temple, but soon after the construction of the palace it has become a famous religious center of Jaipur.
The Laxmi Narayan Temple or Birla temple is situated on the foothills of the south of the Moti Doongri fort and is dedicated to Lord Vishnu and his consort Goddess Lakshmi. This temple is constructed by the Birlas in pure white marble and comes with three domes which depict the three major religions of India and it is a sheer tribute to the secularism of the country.
The walls of this spectacular temple are adorned with the quotes from Bhagavad Gita as well as from the Upanishads. From the walls, the pilgrims can understand the mythological events. The splendid structure and beautiful carvings that adorn the walls make it a masterpiece.
At night, the temple is decorated with lights which enhances the beauty of the temple and this view should not be missed by the pilgrims of the temple. The temple also comes with several beautiful deities of religious saints, historical achievers and philosophers.

Explore more about Culture of Jaipur