Jaipur, known as Pink city of India is known for its cultural heritage, beautiful monuments, and gorgeous palaces. Founded by Maharaja Jai Singh in the year 1727 AD, Jaipur is one of the prime tourist spots now in Indian tourism and from all corners of India and outside of India millions of tourists come every year to explore, enjoy, and learn about Jaipur and its royal history with Rajput dynasty.
The best part of monuments in Jaipur is their deep insight behind their foundation works as well as the royal legacy and heritage associated with their creation and perhaps the association of culture and heritage has made these Jaipur monuments historical and “must-see” places in Jaipur travel plan.

There are numerous monuments in Jaipur; in fact the royal tradition of contemporary Rajput dynasty was to capture some unique achievement or special events, or a legacy in the form of monuments.

City Palace complex Jaipur is a huge complex consisting of several individual halls, mahals, temples, chawk, etc, like a miniature city. The palace is built between 1729 and 1732 and it was initiated by Sawai Jai Singh II, king of Amber.
The architecture of this massive place premise was the successful combo of different style of architecture and two prime architects were Vidyadar Bhattacharya and Samuel Swinton Jacob with active participation of Maharaja Jai Singh LL. The entire premise is built on fusion architectural style like Indian architecture, European, Mughal, and Rajasthani architecture together. 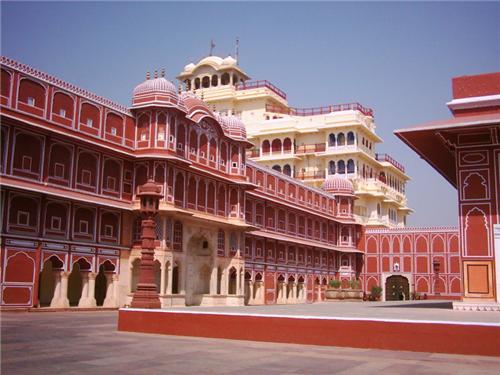 Located on the small valley at the outskirt of Jaipur, Amber Fort was built by Raja Jai Singh although the initiative is taken by Raja Man Singha. The fort is an excellent specimen of Hindu and Islamic architecture style and is built with white and sandstone. 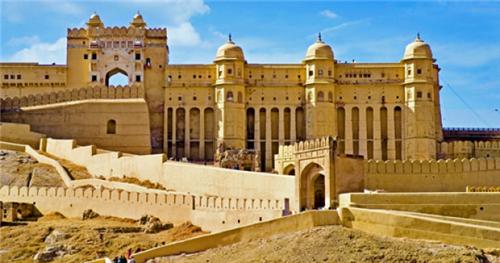 Known as one of the most important army base of Rajasthan, Jaigarh fort is a wonderful specimen of Royal fort of Rajasthan. The west side of the fort has a watch tower and extensive boundary wall which is 3 km in length and 1km width.
One of the biggest canons of medieval era of Rajasthan is housed here; it was named as 'Jaivana Cannon'. The complex of Jaigarh Fort is quite big in size and includes different structures like Vilas Mandir, Aram Mandir, Laxmi Vilas, Lalit Mandir, and a sprawling garden inside.

Jaigarh Fort
Located on a small hill called “Cheel Ka Tilla”, The Fort Jaigarh looks like jewel on a royal crown. The blue print of this fort was planned by an expert architect Vidyadhar. Being titled on the founder king of the city Maharaja Jai Singh, the fort is still today a grand example of Rajput defense.

Known as Tiger Fort also, Nahargarh Fort was built in the year 1734, on the hilly terrain of Aravalli Hill. Once, it was the prime watch tower for Jaipur defense, Nahargarh Fort is attached with Jaigarh Fort via its fortification. Although the fort was initially built by Jai Singh, the construction was complete by Sawai Madho Singh. The fort was finally renovated by Sawai ram Singh in the year 1868.
Because of its position on the top of the hill, the fort presents a spectacular view of its neighborhood. 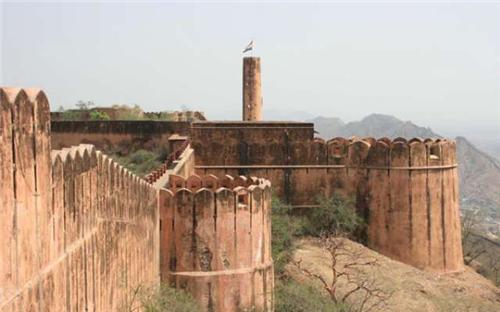 Nahargarh Fort
This historical monument was built in the style of Indo-European architecture and houses multiple special structures within its premise.  The entrance gate of this fort is called Tadigate. There are two temples inside this monument, one is the deity of the Ajaipur oyal family and other other temple is dedicated to the deadd-prince Nahar Singh Bhomia.
Madhavendra Bhawan,a well decorated kingly mahal of this fort, is built by Sawai Madho Singh, and massive hall Diwan-e-aam are two special structures inside the Nahargarh Fort.

Hawa Mahal is a massive 5-storied palace in the downtown of Jaipur city and globally famous as “Palace of the Winds”. It was built by Jaipur King Pratap Singh in the year 1799. Built with pink and red sand stone the prime architect of this palatial building was Lal Chand Ustad. 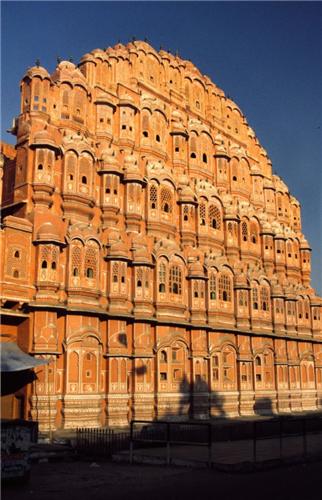 Now a part of Heritage Group of Hotel, Samod Palace, Samod Bagh, and Samod Haveli are heritage monuments of Jaipur, and are constructed with fusion art of Rajasthani and Mughal style of architecture.
Inside this palace famous structures are Sultan Mahal, Durbar Hall, Seesh Mahal and the fort situated at the top floor of the palace.

Samod Haveli is part of this heritage group and is faced toward north.  Extremely decorated inside, this haveli is a grand display of royal culture and opulence.
There is an elephant ramp at the entrance gate of this heritage monument.

It is a garden and once it was a royal garden only. The arrangement of the garden was planned blending Islamic and Rajput style of gardening blending together.
With 61 m long water channel, plenty of  water fountain, and rate plants harvested, it was place of royal amusement. Presenlt used as a premium hotel the garden as one of the integral parts of Samod palace monument is a must see place for tourists coming for enjoying the city of Jaipur.

This astronomical observatory is a cynosure spot in the city of Jaipur. Founded by Raja Jai Singh, this astral observatory is a huge monument with historical importance as well as a tribute to science. The monument was built with stone and meant for calculation of local time, declination of sun, planets, altitude, and calculation eclipses. There are total 20 different instruments for different astronomical calculations.

Sisodia Rani Ka Bagh, the royal garden with luxurious arrangement of trees, fountains, water courses, and wonderful murals depicting the mythologies of Radha and Krishna, was made by Sawai Jai Sing for his beloved second queen, the princess of Udaipur.
The pained pavilions are one of the best attractions of this sprawling garden besides its other entertaining features. The garden, built in shahi Mughal style, was the resting place for queen and the king, away from the hustle and bustle of city.

Sisodia Rani ka Bagh
The best time to visit this beautiful garden is between March and July months. Not for the beauty of the garden, during this time Jaipur enjoys best climate. hence, monsoon to winter is the best timeframe to visit this royal place.

As denoted by its name, Jal Mahal is a palace in water; in the year 1799, Swai Raja Pratap Singh constructed the palace in the midst of Man Sagar Lake. The palace is built with the fusion art of Rajput and Mughal architecture.
It is a 5-storied building but during monsoon when the lake becomes full, all its 4 floors remain under water. There was a big garden on the roof top of the palace and at each four corners of the garden  semi octagonal shaped towers were built with elephant cupola and that makes the entire ambience majestic.

Gaitore is the royal necropolis where all the burial spots of Kaachwada Rajput Kings are housed. Each of these burial spots is distinguished with a cenotaph, locally known as “Chatris”, which used to be built as per the taste and preference of the king whose last rights were performed there.
The cenotaph of Maharaja Jai Singh deserves special mention in aspect of beauty and ornamental design embossed on it. There was one unsaid rule of making these chatris; the chatris of widow queens are found roofless, while the queens died before their kings had their cenotaphs with a roof structure.

Although history and royal heritage is the pulse of Jaipur as one of the prime tourist spots In Rajasthan, Statue Circle displays modern vibes along with its great combo of history and heritage. Statue circle houses a huge statue of Maharaja Sawai Jai Singh II, and it is located at the heart of the city of Jaipur.
The statue of the raja looks magnificent with its marble structure and kingly gesture, facing toward the city, of Jaipur. The king was an ardent lover of astronomy hence his statue are found with different astrological designs embossed on it. 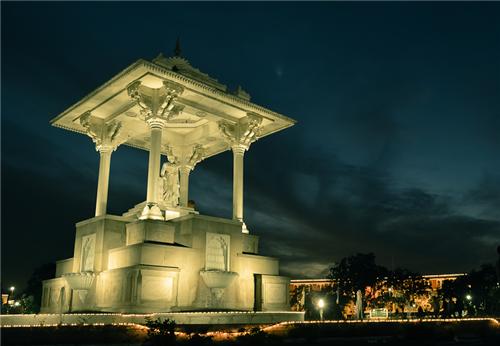 Built on 19th century by Swami Ram Singh II, Albert Hall Museum, Jaipur is one of the oldest museums in the city. Designed by Colonel Swinton Jacob in 1876, it was built on the occasion of welcoming King Edward VII as Prince of Wales on his arrival of Jaipur. 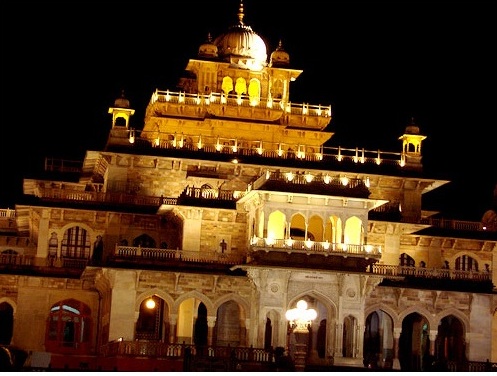 Dolls museum was built on the year 1974 and the prime aim of establishing such a museum is to present a comprehensive overview of different cultures present all over India as well as all over the globe. These dolls are displayed with respective national dresses as well as bridal dresses. The museum displays some excellent costumes for classical Indian dance in different streams. Dolls museum is located 4 km away from City center of Jaipur and remains open for visitors throughout the year.

Situated at 10km away from Jaipur city on Jaipur Agra Highway, Galtaji is a temple complex consisting of numerous temples devoted to Balaji and Sun God as well as of natural kundus.  It is an auspicious site for Hindus and it is believed that after taking bath in this holy water people can get relieved of their sin. Several monkeys live here and therefore Galtaji is often called Monkey temple. The day Makar Sankranti pulls huge numbers of pilgrims around the world. 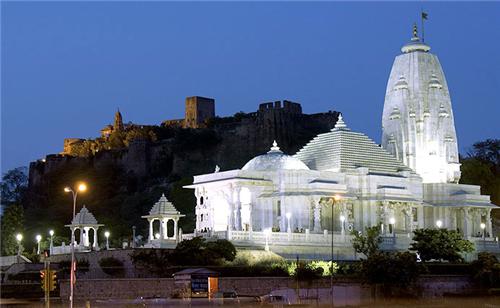 Lord Ganesh is called Siddhidata and perhaps the concept of Mokskha and Siddhi are the reasons in and around Rajsthan many Ganesh temples are found. Ganesh Mandir of Jaipur city is one such ganesh temple that is believed auspicious and Ganeshji of this mandir sanctions devotees’ prayer at ease.
This temple is situated on a small hit called Moti Doongri. The temple was built under inspiration and patronage of Seth Jai Ram Paliwal during early 18th century and it is located at close proximity of Moti Doongri castle. The temple is built on an area of 2 km and completely carved out of stone. The idol of Ganesh remains hidden in the temple and never comes exposed unless it is a noteworthy occasion.

Govind Devji Temple Mandir is one of the most famous temples in Jaipur which is listed and acknowledges in world Guinness book for its marvelous architecture: at one go the temple can accommodate 5000 devotees.
It was built on 1890, and the entire construction was done using white marbles. The temple which we observe now is made of white sand stone and obviously a grand specimen of Indian architecture. It is believed that this temple was built by Sawai Jai Singh II.

Khole Ki Hanumanji Mandir is one of the most popular temples in Jaipur. Haumanji is Sankatmochan incarnate here. Every Tuesday priests and common people get assembled in the temple for performing Aarti, prayers, and the Aarti fire is called holy fire and people love to touch this holy fire. Here the idol is found in lying condition therefore the temple is also known as Lete ki Hanumanji. Devotees come to this temple at regular basis all through the year.

Kanak Vrindavan Temple at Jaipur was built by Raja Jai Singh and local history supports that this beautiful Krishna Mandir was constructed more than 100 years back. Besides its beautiful landscape beauty of the valley surrounding the temple, the architecture and decoration of the temple catches attention of the beholders.