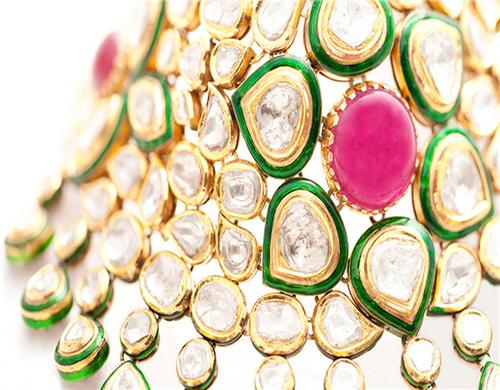 Jaipur-the pink city of India, can be land marked as one of the best cities across India to shop in.

Apart from the color of the city which is appears to have been painted in pink, Jaipur is also a city that offers great variety of jewellery, semi-precious and precious stones.

The specialty of the pink city is the designer Kundan Jewellery- a style in Indian jewellery which is still one of the most popular jewellery styles even now. Jewellery lovers place Kundan Jewellery at the top of their favorite jewellery’s list. It is among the oldest forms of jewellery design that is sold across Jaipur and several parts of India.

As opposed to common believe, Kundan Jewellery is not just a design that includes gems and stones. Kundan is refined 24 karat gold and the name of the jewellery style has been derived by the main component of the jewellery.

In the earlier days Kundan as in pure gold was only adorned by Kings and Queens of India. The style originated during the Mughal Ruling period in their capital and present capital of India-Delhi. But gradually the skilled artisans ended up in settling in Rajasthan, predominantly in Jaipur.

Since then the title of creating the best and finest Kundan Jadau Jewellery was awarded to the city of Jaipur in Rajasthan, which is also the current capital of the state.

The word Kundan belongs to the Sanskrit Language and means ‘Gold’ which was instilled in the vocabulary of the people of Old India.  Even today, would-be Brides and even grooms prefer wearing Kundan Jadau Ornaments for the purpose of weddings. The popularity of this Gold jewellery style is spread across India, especially in the Northern and of course the western region of the country. 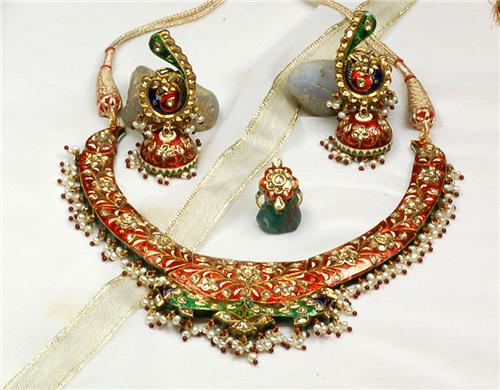 The process is not only difficult but is also quite time consuming and is divided in different stages.

A sheet of pure gold is beaten into a thin sheet which is then fitted with different gems with the help of Lac which is a natural resin derived from trees. Hot molten gold is then poured along the sides, which helps in creating a strong setting for the gems fitted into the gold sheet, as soon the gold cools down.

Prior to the gems being set into the Kundan, a frame is created with the gold sheet which is then welded on a flat gold sheet with the help of Lac. This is basically the base for the gems which ensures that they do not fall off from the jewellery in any way. It is one of the best ways to fit in gems and stones into any kind of jewellery to ensure proper preservation of the gems.

Apart from gems and stones even Meenakari which is a form of colored engraving on metals, is also done on Kundan Jewellery which was a much later addition to this form of jewellery.

Nowadays, due to the high cost of Gold jewellery, a market for imitation Kundan Jewellery has developed and is in full bloom across the whole of India. It is high demand and high cost, were basically a complete mismatch which is why in many parts of the country including Rajasthan itself, fake Kundan Jewellery which is created predominantly bronze.

The fake Kundan Ornaments are an excellent copy of the original designs, only the metal is not the expensive Gold.

You can also check more here about  Traditional Jewelry of Jaipur


Explore more about Culture of Jaipur