Jawahar Kala Kendra was inaugurated in the year 1993 by the state government of Rajasthan in the year 1993 and dedicated to our first prime minister of India Late Shri Jawahar Lal Nehru.
The main aim of the centre is to revive the cultural as well as spiritual values of India and also display the rich arts and craft heritage of the state. Though the idea for the building conceived much earlier, but the construction started only in the year 1986. The centre is designed as an analogue of the Jaipur’s original city plan prepared by the Maharaja Jai Singh II during 17th century.
He prepared the plan based on the Shilpa Shastras which is based on Vedic madala of nine houses or squares that represent the 9 planets including Rahu and Ketu. Thus the Jaipur city is planned based on nine squares of Yantra where one of the squares is displaced and two other central squares are combined. Further, the squares come with 8m high wall which is the fortification wall found along the old city of Jaipur. 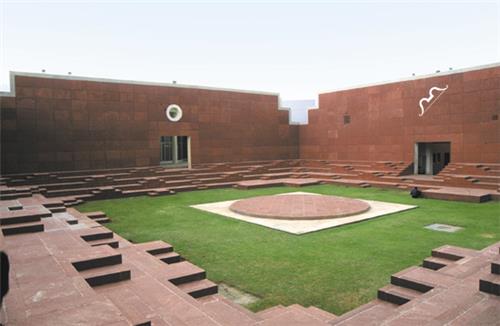 The building program is disaggregated and comes with the 8 separate grouping according to the myth represented by the planet.
The astrological symbol of each planet is expressed in the cut out opening found in its external walls. Jawahar Kala Kendra comes with eight blocks that houses theatres, museums, library, cafeteria, arts display room, hostel and studios.