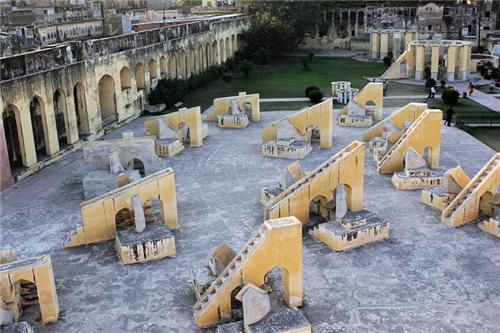 The Universal Value of Jantar Mantar

In Indian language Jantar means instrument and Mantar means calculation, and thus Jantar Mantar means instrument for calculation. It is built on Ptolemaic positional astronomy and after its launching by Jai Singh it is grossly renovated by Major Arthur Garrett.
At 18th century, when this observatory was found it was counted as a meeting point for diverse scientific culture and gave a special insight for cosmology. Jantar Mantar was considered as an emblem of royal authority because of its urban measurements, specific control of time, astrological and logical forecasting capabilities. The requirement of this monument was three in one at one go like religious, scientific, and political in its broader aspect.
The observatory of Jantar Mantar in Jaipur has been influenced by its outdoor location under tropical climate, and then by its provisional desertion during 19th century.Nonetheless, the overall reliability of the site has been fundamentally maintained and partly reinstated. On the other hand, beginning the legitimacy of each specific instrument is more intricate, as a consequence of the numerous interventions applied over the structure.

History of the Jantar Mantar

Maharaja Jai Singh II, the creator of the Jaipur, was an avid astrologer. He studied a lot on philosophy, architecture, astrology, and religion in different schools, and was extremely familiar with universal mathematical perceptions for example, Euclid's Clements, Master works of Aryabhatta, and on Ptolemy's Syntaxes, etc. In the year 1718, he planned for construction of an astronomical observatory of fame.
The 'Jantar Mantar' at Jaipur, was the principal conservatory with the country, was renovated several times and comprises of various tools that provide exact measurements of time, declination of the sun, the locations of constellations with numerous other astral phenomena. The Jantar Mantar Jaipur observatory was work wise active for seven years only, as contemporary Maharaja was not very efficacious in calculating accurate astronomical observations.

The astronomical observatory consists of 14 major geometric devices for measuring time, tracking constellations and, even for, determination of celestial altitudes observing the orbits around the sun as well as predicting eclipses.
Popular constructions within the Jantar Mantar are the 'Samrat Yantra' (the world's largest sundial), the 'Hindu Chhatri', the 'Jaiprakash Yantra' and numerous symmetrical constructions with astral devices to analyze the 'universe'.
All the mechanisms in general are big structures ascribing the precise forecast. Designated as the national monument in 1948, every instrument in Jantar Mantar has its own individuality constructed by the stones and marbles at an astronomical gauge.