Jal Mahal, the water palace of Jaipur is one of the most beautiful and serene places to enjoy in Jaipur. Locales claim that the palace is almost 300 year old whereas according to history, it was constructed at around 1734, at the time when Raja Jai Singh constructed the city Jaipur.

Lots of mysteries are known about the water palace. However, which was once the spot for duck hunting of Jaipur kings and their family descendants, it has become a must see wonderful tourist spot in Jaipur. 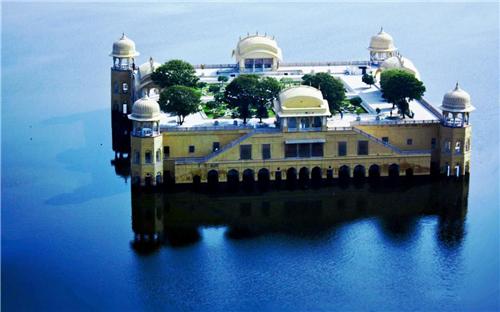 Surrounded by calm and quite water body of Man Sagar Lake, Jal mahal, Jaipur is not like other palaces, as it is comprised of a big mono chamber with a roof-top garden adjacent, called Chameli Bagh. It was basically built for duck hunting of the royal family members and for merry making activities and perhaps this water palace looks more like an island resort. Following Rajasthani architecture, this palace looks like a floating palace just emerged out of lake.

Built and maintained by royal family of Jaipur this water palace is a wonderful mixture of Rajput and Mughal architectural style and ambiences. The entire palace is built on red sandstone and it is a 5-storied building.

The 4 floors remain under water during monsoon. The top floor remains exposed and with a beautiful roof garden and there are several arched passage ways. There are 4 special octagonal shaped domes or the “chatri” are placed on the roof top adding beauty to its shape.

As 4 floors are mostly under water, the floors get severely damaged due to prolong water logging and it requires heavy renovation to restore the beauty. The government has taken renovation scheme from expert engineers to restore its old ambience and one can see that a lot of work is going on.

The History of Jal Mahal

Initially this lake was made for fighting famine and rain troubles of Jaipur area. The dam was constructed between Amargarh and Amer hills using quartz and soil; which left a stony- structure in the midst of the dam, which is considered to be perhaps the first structure of today’s Jal Mahal.

The dam is still found with 300 meters long and 28.5 – 34.5 meters in width measurement. Although the dam and the palace had gone through several phases of restoration, the major renovation of the palace was executed by Maharaja Jai Singh.

The palace looks awesome in the daylight at the backdrop of serene vast water body of Man Sagar Lake. At night it looks mysterious with the flood lights focused on the palace in the midst of the water.

The awesome combo of Nahargagh Hill, Man Sagar lake, and the palace offers an outstanding picturesque beauty for its spectators and that attracts huge flow of tourist all-round the year. 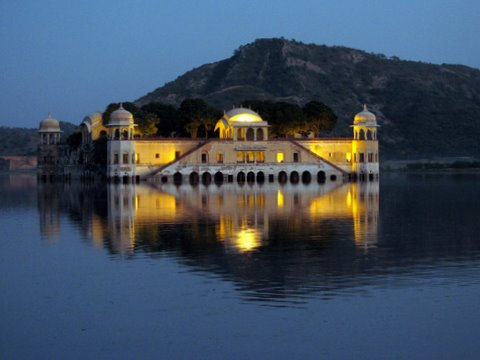 How to reach Jal Mahal

The Jal Mahal palace within the Man Sagar Lake is accessible from the Jaipiur - Delhi National Highway No 8, over a road distance of 4 kilometer (2.5 mi)) from Jaipur.