One of the major engineering achievements of humankind is introduction of Metro Rail into existence. Not only it has influenced major parts of world by functioning in various European and Asian countries but is further motivating many other regions to bring it use. Metro service has served people with comfort in various terms. In India the metro service was first introduced in Kolkata in 1984.

Later DMRC made metro service functional in capital city of India – Delhi in year 2002 in month of December. Unprecedented growth of private vehicles day by day was a major issue for which Metro service has shown a major effect. Its been realized that metro service has promoted people to use this facility for regular travel, which not only reduces journey time but also reduces per day fuel consumption and air pollution. 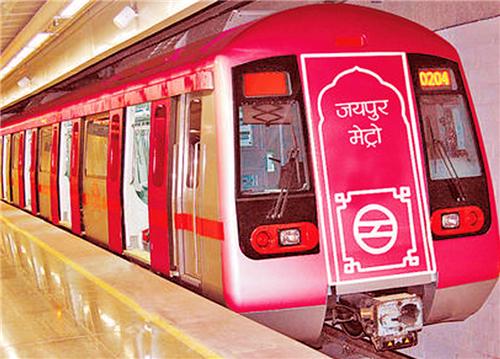 Other than Kolkata, Delhi and Bangalore, many other cities have been proposed with Metro Railway. Jaipur city capital of Rajasthan is expected to become India’s fourth Metro Rail system after other 3 cities. The construction part of Metro Rail had started in year 2010 with line comprising from Mansarovar upto Chandpole Bazaar. The Metro rail service in Jaipur is being executed by JMRC i.e. Jaipur Metro Rail Corporation.

It is a corporation working under Government of Rajasthan. According to the JMRC authorities, the train is expected to start in early 2014 year after all the trials and safety measures being taken in 2013. The whole project is supposed to cover around 29 stations in Jaipur which will comprise of 2 lines which are Green Line (Phase – I) and Orange Line (Phase – II). At present the construction process is undertaken for Green Line Phase – I route of Jaipur Metro Rail which will be running from Mansarovar to Chandpole and Orange Line i.e. Phase – II will connect Sitapura Industrial Area to MI Road.

The road networks of Jaipur have been facing traffic congestion during peak hours. Due to growing population and development of city demands development even in terms of transportation facilities. After Delhi has experience a very positive response after introduction of Metro Rail by DMRC, Jaipur is another city which would be experience relief in terms of aggravated congestion on roads and streets due to increase in population.  Addition of metro service will propose people to travel through public transport rather than private transportation methods.

This will not only make their life easier in terms of less commuting time and stress free travel but will also contribute to healthy surrounding and environment by reducing less pollution emission. It will be justified to say that Metro Rail is one of the most effective technologies that has been introduced in various cities in India which is a very major contribution to human kind in today’s busy life. In every way it has proved itself worth of every effort being made for its growth in many other cities too.

Very soon Jaipur the Pink City will be blessed with the plan of Metro Rail that will be running across the city’s various parts connecting them through two phase of connecting lines and millions of people will experience relief in terms of travel in the fast growing city of Rajasthan.

The Jaipur metro, considered as the 'fastest built metro', was opened to the public on 3rd June, 2015. Its maiden journey was flagged off by the CM Smt. Vasundhra Raje. The metro being a symbol of cultural and economical growth, also encouraged equality to women at work with about 30% of women workers in the staff.