Shri Digamber Jain Atishaya Kshetra Mandir otherwise called as Jain Mandir is situated 16 Kms from Jaipur. The Sanganer town is situated 13-14 Km south of Jaipur on the National Highway No 12 which is the Jaipur-Kota Road.
The principal deity of the temple is Lord Adinath who was the first tirthankar and the deity is some 4000 years old. The temple was constructed in many phases and the last phase was completed in 10th century A.D. This was mentioned in the inscription of V.S. 1011 and in one of toranas (pylons).
The seven storied temple also comes with sky high Shikharas and the inner sanctum comes with eight Shikharas that are of sky high. 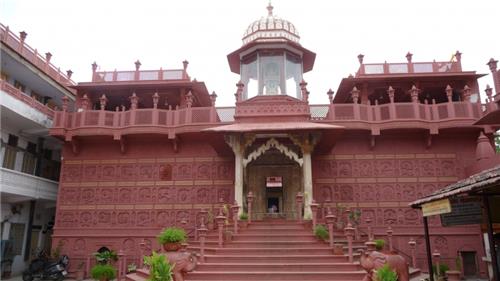 Architecture of Jain Mandir in Sanganer

The entire temple is made out of red sandstone based on ancient style of architecture and comes with breathtaking images. The architecture of the main gate reminds the tourists of the famous Dilwara temples of Mount Abu.
At the centre of the underground, there is a small temple which is guarded by the Devas (Yaksha) and only Balyati ascetic Digamber saint alone can enter this temple and bring out the idols of this temple for a particular period of time. This underground temple came to be known when Muni Sudhasagarji who was the disciple of Acharya Vidyasagar ji visited this temple.
It was Muni Sudhasagarji who brought out valuable Jain murti that is made out of precious stone in the presence of some 5 lakhs disciples. He also stated that he had to encounter several Yakshas who were protecting the place in the form of snakes and further stated that ordinary people cannot enter the temple without the permission of the Gods who protect this temple.
This process also was live telecasted in various TV channels which is also covered by the media widely. The idols that were brought out for darshan should be returned to the underground temple when the auspicious signs are prevalent.
Yet another story states that the idol thus brought out by the Muni Maharaj once got delayed in keeping it back because of some reasons and he was attacked by the insects and he had to place it back immediately. The inner temple is made of stone shrine and the idol of Parshwanath with seven serpent hoods is found in the centre of the temple.
The idol is surrounded by the carvings of creepers, elephant pouring water from pitchers and lotuses. However, the main idol of the temple is Adinath which is installed in the shrine just behind the beautiful inner shrine. Though the outer parts of the temple are made out of red sandstone, the inner parts are made out of white stone.
One of the walls in aagan or open hallway had inscriptions on the underground temple. The main temple is designed like a square with several Gods adorning the perimeter of the square.