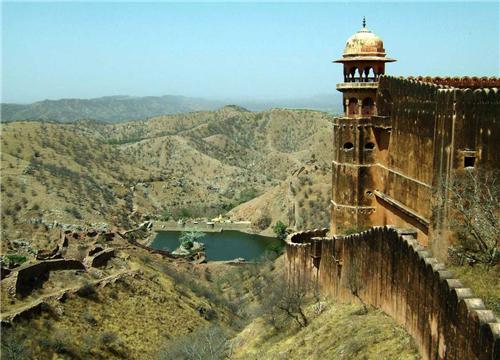 View from Jaigarh Fort
The Spectacular Jaigarh Fort in Jaipur is beautifully designed and speaks in volume about the Indian historic culture. The Fort is also referred as the "Fort of Victory" in ancient India. The ancient Fort was built in between 15th and 18th century. Rampart construction of the building can be viewed from the Jaipur town.

Jaigarh Fort situated in North of Jaipur is built in 1726 AD and later on after its renovation by Maharaja Jai Singh II it was given the name Jaigarh Fort. The Fort was built as a residential place for king, but later now it was used as a safe storage place for storing weapons used in wars.
During medieval time, Jaipur being the major weapon producing centre where Forts are used for the storage of weapons. Those weapons are still available on display in Fort museum.

It is considered one of the prominent military structure set up during medieval India enclosed with a granary, several temples, palaces, a tall tower, cannon foundry, and the Jain Bain (Jaivan), largest cannon in the world.
It is intact from various battlements surrounding the fort area. It is much similar to Amer Fort also known as “Amber Fort”. It encloses a large volume of area where weapons can be stored arms, ammunition and other important requirements during war.

The magnificent interior predicts the city culture and tradition in its architect design. The entire architect at the fort depicts the city affluent culture, which is designed by Vidyadhar, an architect.
The Fort is situated on top of Aravalli hill and was never captured. At this altitude a panoramic view of Jaipur city looks very beautiful. Jaigarh Fort is located 400 meters up to the Amber Fort. It is 3km in length and 1 km in width.
Fort is beautifully made with the red sandstone covering the exterior while interior is designed like a square garden at the centre of Fort. Among the three entrances to the fort the main entrance called as “Doongar Gate” was constructed in 1942 by ‘Maharaja Sawai Man Singh-II'.
The Awani Gate was built to connect the Amber and Jaigarh Fort. Sagari Gate was the original entrance created from Sagari side of the fort, but the gate is not in use presently.

The Jaigarh Fort Jaipur encloses various other structures such as Temples, Water Reservoirs, Museums, Entertainment areas, Cannon Foundry, Residencial Palaces, watch towers, gardens and so on. At the entrance from Doongar Gate, three water tanks are built to serve day to day water requirement of soldiers.
The largest tank among the three tanks is one 158x138x40 ft long. The largest tank is fully covered with to prevent water from any type of impurities, dust and evaporation. The roof of the tank is made with 18 pillars supporting the largest tank. 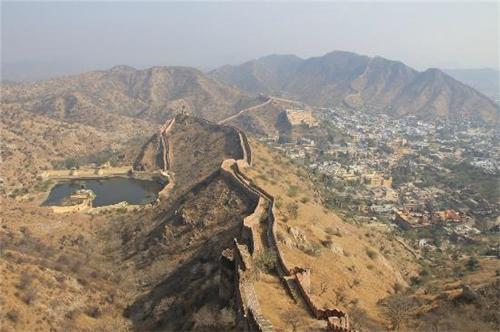 The fort walls of Jaigarh
The Fort is also built with a Second tank, which is associated with an interesting story and fact behind is attached. An interesting story is also associated with a second tank built in the fort. The roof of the fort has nine holes and behind each hole there is a room which was used to store the huge among of treasure.
It is believed that Jaigarh fort had a huge amount of treasure hidden inside it. It is said that after winning battle against Kabul and frontier area, the acquired treasure were kept inside the tank safely.

It is said that in 1970, during her tenure, her relations with Gayatri Devi, Queen of Jaipur and Rajmata of the royal family. Rajmata was imprisoned at the Time of Emergency and an income tax raid was conducted on Royal family. During that raid an old document mentioning the existence of huge treasure and location of hidden treasure was found.

This old document is believed to be made during the governance of Sawai Jai Singh's. As Indira Gandhi heard about the existence of large wealth inside the fort, she send her officials to find out the treasure.
During this period for two days, any road leading to the fort were closed to prevent the entrance into the fort and it is said that she had taken all the treasure within these two days. It's just a belief, as nobody knows the fact about the hidden treasure.
It is also said and published in a book that the then prime minister of Pakistan Zulfiqar Ali Bhutto has also demanded Indira Gandhi to share the treasure with Pakistan, but she refused by telling him that nothing was found in the fort.

The Third water tank is 61x52x27ft in dimension and is located in the southern courtyard of the monument. From Southern Courtyard an entrance opens into ‘Jaleb Chowk'. The Southern courtyard is in front to the palace complex and has Museum Gallery and offices on either side.
In the palace complex at the left corner of Jaleb Chowk there is a temple of God Shiv and Vishnu named “Ram Harihar”. The temple was made in 13th century where images of God are incarved in marbel.
Another Temple located at the left corner of Jaleb Chowk is the temple of Bhairav, which signifies the angry form of Shiva. Bhairav is worshiped here as a guardian of society. The idol of Bhairav is made in black color with eight hands holding weapons on each one of them.
North side of the Jaigarh Fort has a huge establishment called as Palace Complex which shows the wealth and power of Rulers of Amber.

Main gates of the fort
While entering Fort from Jaleb Chowk towards northern side, Subhat Niwas is the first palace in the entire Palace Complex complex. Subhat Niwas was used by the King to address his army. The Subhat Niwas is 69x34ft long in dimension and is used to discuss strategies, plans, order soldier to keep the task. Some of the main attractions at the hall are Elephant Seat, Big war drums.
The bedroom is made from a stone Jharokha Screens with Jali work to allow the fresh and cool breeze enter into the room. A beautiful view of Sagar Lake can be seen from the balcony of Lalit Mandir.

For the ladies of royal family there was a special arrangement for their get-together , Vilas Mandir built in 17th century is used for the Royal family members get-together. Vilas Mandir is also designed Jharoka screens with Jali works. Inner hall of Vilas Mandir is designed with ‘Araish work'.
In the 16th century Aram Mandir was built for the relaxation of the royal family member to spend relaxing time inside the fort, it is also called as Garden House. From the balcony of Jaigarh a panoramic view of Amer looks very different and beautiful. Palace complex exits at the Jaleb Chowk is the destination at the right corner, where there is an entrance to cannon foundry.
The cannon placed in the foundry was built in 1691 and was used during wartime named as ‘Bajrangvana'. The Canon is driven by 32 Oxen, the cannon consist of iron sleeves inside the barrel which makes it heavier and provide more resistance to barrel. 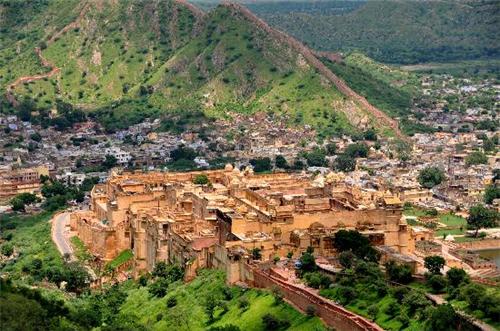 Amer fort, as seen from the walls of Jaigarh Fort
Surya Mandir built in 11th century is now used a small museum where tools of cannon foundry and blacksmith of old times are kept on display for visitors. It consists of seven verandas along with rooms interior of it and after its construction it was renovated many times.
Other tools kept on display are mould for casting cannon, which is kept safely in the furnace and drilling complex of Canon foundry. Cannon foundry exit at the Jaleb Chowk and enters into the south west block . There is a huge wide gate constructed for the entrance into the South west block.
As entering into the south west block of Jaigarh Fort small castle called as Vijay Garhi is there, which is used for the storage of armory and is also used presently for the same purpose. Now coming to the highest point in Jaigarh Fort that is Diya Burj also called as Watch Tower, it is seven storey high and is especially used for water storage and collection.
Jaipur flag flies at this position and on each birthday of Maharaja, an oil lamp is lit on his remembrance.

The main attraction at Jaigarh Fort is the ‘Canon on Wheel', Jain Ban (Jaivan). It is the largest cannon in the world which rest on four wheeled carriage with 9ft high front wheels and 4.6ft high rear wheels.
The cannon was built in 1720 and is not used till yet, it was only once tested during which nine people were killed along with the gunner due to the shockwave of fire, and many houses collapsed in Jaipur. When the cannon ball was fired it landed in Chaksu, 40 km away from the fired place, where a pond was formed deepens into the surface.
Jaivan barrel weights 50 tons and is 20.2ft long. The circumference measures 7.4ft at tip and at rear is 9.4ft. the barrel rests on 24ft long shaft. The heavy barrel is beautifully decorated with a pair of duck at the rear, pair of peacock in the centre and elephants at the top of the barrel along with floral design carved superficially over the barrel.
For each fire cannon need 1ookg gunpowder along with 50kg cannon ball. In 1621- 1667 Mirza Raja Jai Singh constructed Lakshmi Vilas which was also used for the other ceremonial occasions.
The floor of the Vilas is beautifully made with Araish work and wall look extremely bright and graceful. Laxmi Vila is connected to different parts of the palace complex through a long dark passageway.

The Palace dining area is divided into two halls one for king and another for queen along with an open courtyard. King and Queen have separate dining hall where they have their meal along with their officials.

Adjacent to Awni gate there is a museum built where Jaipur culture is preserved in the form of stamps, circular pack of cards, picture of kings and queens and other members of royal family. A spittoon used in 15th century and hand-made plans were present in museum kept safely with it.

It is the highest Fort in Jaipur perched on the ‘Cheel ka teela'. Attached to Jaigarh Fort various other location like Amer Fort, Aravalli hill and Vijay Garh are the important tourist attraction in Jaipur.
The Fort is located 15 km away from Jaipur city and opens into a Dungar Darwaza presents at the Delhi-Jaipur highway which leads to another important Fort that is Nahargarh Fort.

The Fort is also surrounded by numerous luxurious hotels where one can stay and enjoy the view of the place from a comfortable residence. These hotels are specially made for tourists coming to the beautiful Pink city, Jaipur to explore the historic monuments and beauty lies in these places

Foreign tourist coming to Jaigarh get crazy about the Rajasthan handicrafts which are about 90 years old. Indian architecture at Jaigarh is at its best, which is the main reason for the attraction of foreign tourist.
The architect incorporated in the walls of fort speaks about our rich ancient culture and tradition. In the Pink City of Rajasthan, it is a precious gem that has to be preserved to strengthen our culture and ancient history.

The things related to those days were well preserved here which people always like to see in real, the military structure, day to day used things, pictures are safely present in these Forts adds to the beauty of monument.
Hence, the Jaigarh Fort has a great historical significance. Jaigarh Fort Jaipur has various features that worth to see which includes Dungwar Darwaza (Main Entrance gate), puppet show, loopholes, water tank and many more.