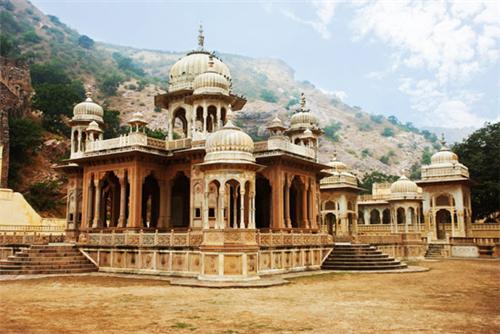 Gaitore is one of the “must-see” tourist attractions in Jaipur. It is the royal cremation ground for Kachhwaha Rajput kings and the other members and relatives of Royal family. The name of the place perhaps is derived from a local form of the phrase, “Gaya Ki Thor” that means “sleeping place of the dead souls”. Located on the Jaipur-Ajmer road, this cremation ground is 15-km away from the main city of Jaipur.
These cenotaphs is dedicated to each Kuchwada Raja. The local name of these cenotaphs is “chatri”, and in Gaitore Jaipur these were made of sandstone and marble. However, although these chattris are symmetrical but each of them are unique by their spectacular decor.

The Architectural Beauty of Gaitore Jaipur

The Gaitore, Jaipur architecture is a unique blend of Rajasthani Hindu art and Islamic architectural style. It is believed that each cenotaph and its inscriptions embossed on it were selected by the king himself before his death. Like Maharaja Jai Singh other eminent kings from Kuchwada dynasty like Sawai Ram Singh, Sawai Madho Singh and Maharaja Sawai Jai Singh II were laid here for their last rituals.
According to chronological record, the necropolis has been used by Kuchwada dynasty since 1733. However the cenotaphs of queens are mostly not found here.

The royal history of the Gaitore is as old as the city. This is the place where the last rites of the king and their royal family members were performed and the cenotaphs are the emblems of these royal members' last rites, respectively.
However, almost all kings’ cenotaphs are found here except the burial place of Raja Sawai Ishwari Singh II, whose cremation was done in nearby Jai Niwas garden in City Palace premise due to some  royal reason. The cenotaphs of Jaipur Maharanis’ are not available here; those are housed near Ramgarh road crossing.