Jaipur, the magnificent land of Indian royalty has hundred of things in relation with tourist recreation. Fairs and festivals in the city is just the right thing, you'd need as a tourist. These fairs presents not just a traditional outlook but a showcases the modernity in the society as well. Let's find out the various fairs Jaipur has to offer. 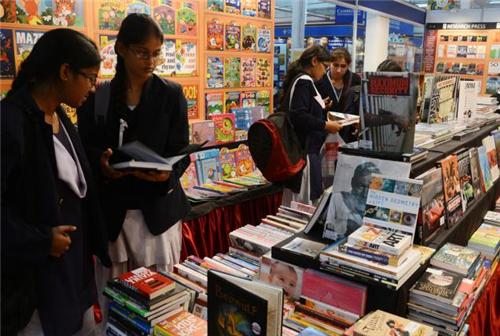 Book lovers browsing through books at the fair
There is no friend as loyal as a book. This old adage stands true since ages. For all the avid literature lovers books are above all material things. Their biggest extravaganza is the Jaipur Literary Festival which is one of its kind and is the biggest in Asia Pacific. For writers across the globe it is an annual pilgrimage. People from different backgrounds, countries and perspective join hands and some creative exchange of ideas takes place.
The literary calendar always remains packed. The national book trust is a prime organization which is involved in conducting book fairs across all the leading cities of our country. 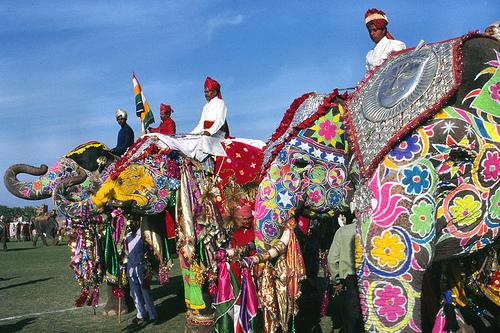 colorful elephants standing in order at the fair
The state of Rajasthan is often touted as the cultural ambassador of India. Calender is always packed with some event, festival or fair. One of the most awaited event of the year is the annual Elephant festival, which is one of its kind.
The Elephant festival is celebrated a day ahead of holi. The venue for elephant festival is the famous Chaugan ground. Elephants are rigorously trained by their masters so that they put forward an entertaining show. Elephants are decorated with various colorful accessories. Many other strings and bells are tied to them so as to entice the crowd watching them.
Another aspect associated with the fair is an exhibition which has all the items in display which are used to decorate elephants. This is known as the Gaj Shringar exhibition. On the whole the uniqueness, grandeur and fervour associated with this fair are such as it is a must watch for tourists and gala time for locals. 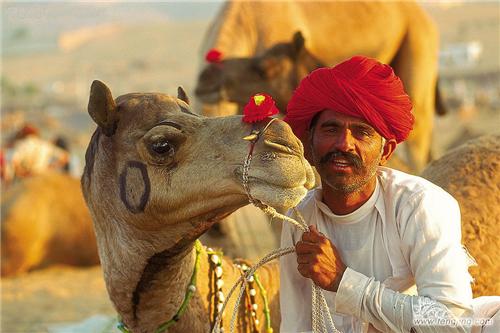 Playful moods at the Camel Fair
Camel is regarded as the ship of desert. The city of Pushkar located near Jaipur is well known for its annual camel fair which falls on the full moon day of the kartik month of lunar calender. The estimated number of camels in that fair is around 50000. The main idea behind conducting this fair was commercial trade between traders. This year it is scheduled to be organized from October 30 to November 6 2014.
Along with camels many local artisans like singers,musicians, snake charmers also display their talent. A craft bazaar is also organized. Tourists can also enjoy folk songs and dances. Also pilgrims come to take a holy dip in the lake. It is believed that a dip during this auspicious time can help them get rid of all the sins they have done in the past.

India Stonemart is the leading event for stones in the city of Jaipur. It showcases products from diverse places. It presents stones of various dimensions, cuts and texture. It is used for commercial aspects also which can range from brand positioning, promotion, market penetration and development. It is a global arena for everyone who is something in the stone industry.
It is jointly organized by CDOS (Centre for development of stones) with FICCI as co-organiser, supported by the Government and sponsored by the all the giants of the stone industry. The principal sponsor is Rajasthan State Industrial Development Investment Corporation Ltd.  Sandstone, Marble and granite are the main popular stones in this area. Jaipur also has a research lab dedicated to conducting advance level studies on stones.
Rare varieties of stones like Natural Aquamarine, Blue Sapphire, Blue Topaz, Emerald, Tsavorite, Tanzanite, Tourmaline are eye catcher for any stone lover. Highly skilled manpower is put to work for intricate cutting and polishing work. The workers are those who have been involved in the same work since generations.