Jaipur, the city of festivals, celebrates the Elephant festivals every year around at the time of Holi. It is a one day event that is organized on the full moon day of Phalgun Purnima that falls in the month of February/March.
Elephants have an important place in the Indian believes and mythology. Ganesha, the Elephant-headed God, is considered to be the remover of obstacles in life and he is devotedly worshiped in all the parts of India. You can also see the presence of elephants in important functions such as marriage ceremonies, religious events, processionals, etc.
The Jaipur Elephant festival, which is conducted by Rajasthan Tourism, is now a part of its annual 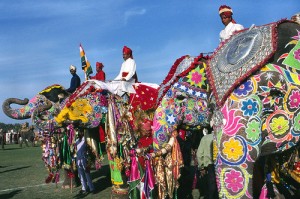 event’s calendar. As the name indicates, elephants are the centre of attraction at the Elephant Festival Jaipur.
In this festival, the elephants are adorned and appareled with colourful and beautiful clothes that symbolize the Rajasthani traditions.
The apparel of the elephants does not only mean clothes, but jewellery and large size anklets are also used as a part of beautifying the natural appearance of the elephants.

Their bodies are painted with traditional Indian motifs and they are decorated with chunky elephant jewels. Large anklets decked with bells decorate their feet and velvet rugs with golden embroideries grace their backs. The ear danglers and brightly coloured brocade scarfs adorn the large ears and neck of elephants respectively. Gold and silver bracelets and rings are jeweled up on their tusks, while royal looking head-plates adorn their foreheads. 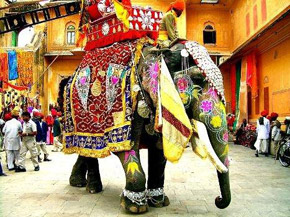 The mahouts give the elephants a bath and do all these make-ups and decorations. They also bask into the sunshine of the festivities by wearing brocade jackets and royal turbans.You can see countless people who come from different parts of India as well as abroad to watch and enjoy the elegant elephant festival Jaipur.