Diwan-e-Aam - The Hall of Public Audience 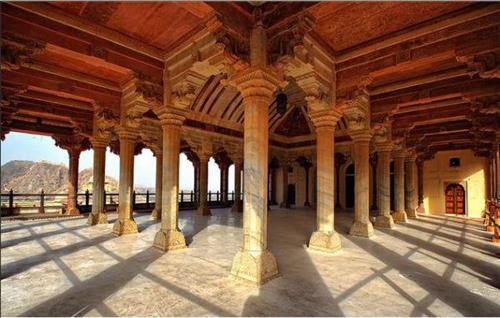 Diwan-E-Aam is otherwise known as Sabha Nivas or Hall of Public Audience is a fascinating chamber found in the Amber Fort, Jaipur. The hill comes with forty pillars and is the best example of complex craftsmanship.
This hall was constructed by Mirza Raja Jai Singh between the years 1631 and 1640 and is in proximity to the Machchi Bhawan.

The Diwan-E-Aam is the first hall of the palace and the 40 pillars are carved with paintings and embedded with precious stones by artisans of Rajasthan. The hall is further adorned with wonderful alabaster work, beautiful floral glass designs that were inlaid and also comes with lattices out of smooth marbles.
The visitors will also find many chambers, galleries and rooms and all these were utilized by the princes and other royal members. The hall also comes with a separate for the Maharajas to receive the general public and address their grievance and several other issues related to their kingdom.
Generally, the king would sit in the chamber that is situated in the middle along with his important courtiers as well as officers in the northern side and officers of lower cadre as well as general public used to sit on the adjoining courtyard that is situated on the west.

Royal ladies used to watch the proceedings from the southern part of the Diwan-e-Aam and they usually watch from the Zenana house or women’s quarters. Hence, this part of the hall is maintained at its best.  Since Shah Jahan liked marbles very much, the hall and the Takht-i-Murassa or the throne room is made of marbles.
From the throne room also one can access the royal apartments where the ladies used to stay and watch the proceedings through the marble windows that were covered with perforated screens on either side of the throne when not seen by the courtiers.
Just below the chamber is a dias called as baithak which is the seat of wazir who reads out the news to the emperor. The hall also comes with balustrades that were adorned by the courtiers according to their ranks/positions.

Sukh Nivas is situated just opposite to Diwan-E-Aam and comes with doors made of sandalwood and adorned with ivory. There is also a way through which cold water is carried and along with the breeze it served as air cooler.
The rooms came with mirrors that are beautifully decorated. The hall comes with shining mirror gleaming on the wall as well as on the ceilings and mesmerizes the visitors through its complex patterns and designs.

Today, Diwan-E-Aam serves as an art gallery that exhibits beautiful miniature paintings from the Mughal, Persian and Rajasthani art, embroidered rugs, carpets, Kashmir Shawls and ancient texts. The visitors will also see the two large elephants on display. Each elephant is made from single marble rock.

How to reach Diwan-e-Aam Jaipur