From the time of its inception, the city of Jaipur has maintained its cultural heritage. Starting from the era of founder architect Maharaja Sawai Jai Singh till date the city has maintained its own cultural flavor. The culture of this city is an excellent amalgamation of convention and cosmopolitanism. The whole city is like its famous heritage monument –“Statue Circle” where past is blended with present, while visitors can enjoy the royal statue of Maharaja Jai Singh, they can sip a good blend of cappuccino while enjoying the majestic ambiance around. 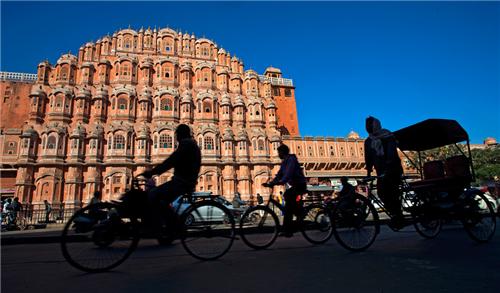 Hawa Mahal is perhaps the only monument tourists relate the most

The forts, the monuments, the palatial buildings, even the royal necropolis speaks of the heritage and glorious history of the city. Before the city was converted into its metropolitan status the pink city was simply known for its colorful history and exclusive architecture, which was based on a mixture of Mughal and Rajasthani style.

The monuments, palaces, shahi baghs, and forts are the display of that lifestyle and culture, which till date is the flavor of Jaipur and its tourism.

The pink color of the city is one of the integral characters of the city which speaks of its inherent culture. In British India, the default the color of hospitality was pink.

On arrival of Prince Edward VII in Jaipur on the year 1876, in order to welcome him with royal reception, the city was colored pink and till date the vibe of hospitality with a royal elegance is maintained as the culture of Jaipur, and that makes this capital city of Rajasthan so special in Indian tourism because it maintains the culture of “Athithi Devo Vabha”. 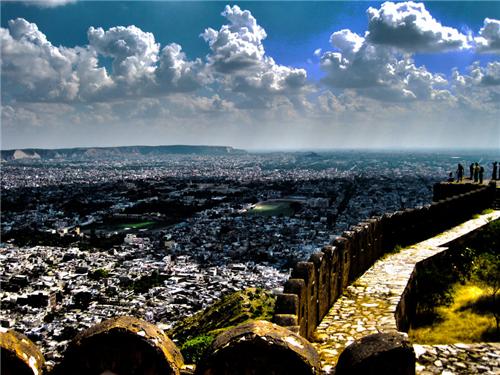 Jaipur as seen from the wall of the Nahargarh Fort

The city of Jaipur being the capital city of Rajasthan enjoys utmost importance in state as well as in national level. It is one of the most significant commercial centers for Rajasthan. Men with turbans and women with Ghagra-Choli is the attire culture of Jaipur, which is still prevalent with the parallel stream of urbanism.

Local Fair and Festivals of Jaipur

The culture of Jaipur is also visible in celebration of local fairs and festivals.  Most of the festivals are community festivals and displays the colorful spirit of the city as well as of the entire state.
Teej, Gangaur are the festival where married and unmarried women pray for the welfare of their family and husbands and put the decoration of mehendi on their palms. Since it royal era Jaipur people paid their attention is keeping pets be it is a cow, or a camel, or a donkey.
Kings and zamindars used to keep elephants. In order to celebrate this pet culture of Jaipur, till date different fair are arranged. Out of them elephant fair, camel fair, donkey fair deserve special mention, and these fairs display the folk culture of the pink city. 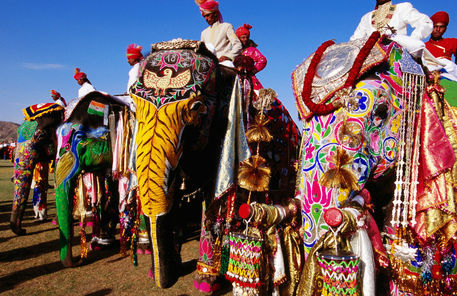 Not only about history and royal legacy, education and patronage to modern literature is one of the integral cultural characters of Jaipur. The popularity of Jaipur Literature Festival speaks of the educational and cultural sensitivity the city of Jaipur for its progeny  Click here to know more

In general people of Jaipur are fond of their folk culture comprising of dance and singing. While Rajasthani folk lore is the traditional song of Jaipur, different dances are seen like Ghumor, Chari, where the dancers show their dancing performance with a lit diya or a pot on their head.
Traditional instruments of this area are Sarangi, Ektara, Jhalar and Surbahar. However in classical dance area Jaipur has a special place for developing Kathak style of dancing which is an eminent example of Jaipur’s classical culture.

Unless we discuss about handicrafts and cottage industry besides performing art of a place, it is never complete without incorporating these areas of creativity in discussion. Carved silver jewellery, ivory engraved sculptures, kundan and meenakari jewellery, wood craft and leather goods are all handmade and are known for their exquisite beauty. 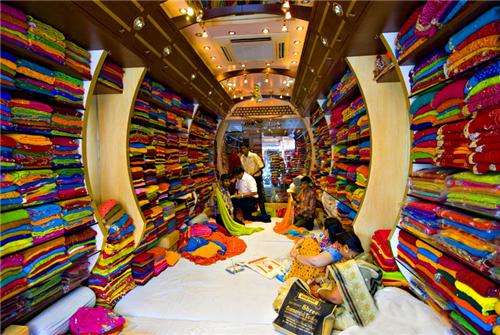 A saree shop in Jaipur

The traditional cuisine of Jaipur speaks of its culinary culture. However, it is known all over the country for its spicy taste and excellent colorful look. Dishes like Missi Roti, Dal Bati Churma, and sweets like Ghevar, Gajak, Feeni, Chauguni ke laddu, Moong Thal are some of the exclusive culinary delicacies form this pink city kitchen.

With a wonderful juxtaposition of ancient royal heritage and ultra-modern life style Jaipur displays a cool presentation of urban lifestyle. As the old forts and havelis are used as premier hotels, similarly this old royal city has wrapped itself with new attire of modernity but its roots are still maintained in its legacy and tradition.

Jaipur has radically transformed from what it looked 10 years back. The development flow is still on. It is ranked as the 5th amongst major cities on India; Jaipur is emerging at fastest pace as an urbanized metro city of Modern India.