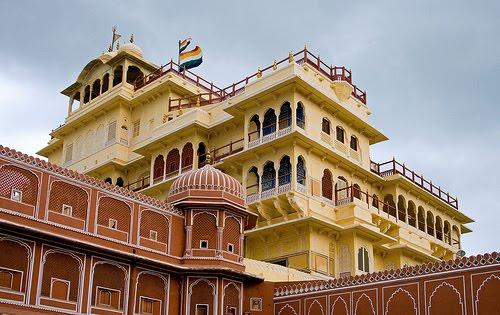 Located at the west end of the premise, it is a seven storied building with separate names allotted for each of its floors. The palace was built by Maharaja Jai Singh and later on his royal descendants had renovated it in various ways.
Also known as Chandra Palace presently, it is the official residence of Maharaja of Jaipur. This 7-storied citadel offers excellent grandeur for its floral decoration, mirrored walls, decorated ceilings, and exclusive mural paintings for its visitors.

A unique mixture of Mughal and Rajasthani architecture, this 7-storied building has seven names for each of its floors like Sukh-Niwas, Ranga-Mandir, Pitam-Niwas, Chabi-Niwas, Shri-Niwas and Mukut-Mandir or Mukut Mahal. The museum is named as Maharaja Sawai Man Singh II Museum. The palace is built in the midst of beautiful sprawling garden and a beautiful lake at its background.

Chandra Mahal and its internal Arrangements

The architecture and setting of the palace is quite massive, and in reality occupies one seventh area of Jaipur, and all its seventh floors are still in active use. The first two floors of Chandra Mahal is a part of Sukh Niwas and Rang Mandir, which is a big hall for housing function where family community gets together.
The top most floors has massive hall, called Chavi Niwas, built with finest quality of glass mirrors. Shova Niwas is known for its decorative beauty positioned just above the Rang Mandir hall.  The third floor of the building is used as the dining and the living room of the king and his family.
The mirror room is housed on the 4th floor and is used for enjoying function in dark. The 5th floor is used as the residence of Maharaja during the rainy season and the 6th floor is used like a panoramic watch tower for the spectacular view of hills around the palace. The 7th floor is called the crown of the palace.


The Story of One and Quarter Flag

The palace holds the insignia flag of Maharaja of Jaipur. The flag is seen unfurled when the Maharaj remains within the palace. If the king is away from the palace the flag of the queen is seen hoisted upon the roof top. People say it is the good wishes of Mughal Emperor Aurangzeb who conferred the title ”Sawai” on Raja Jai Singh, which also means one and quarter flag.

Legends of the Palace

The palace had witnessed several tragic stories as well. Ishwari Singh was Maharaj Jai Singh’s youngest son and he was bitten by venomous snake and he died out of deadly effect of snake venom. Post his death his 21 wives accepted Jawahar ritual together.

This beautiful palace is also known as Moon Palace. The walls and gates are elaborately designed with Mughal style, with numerous murals, frame and mirrors decorating them from sides. It is one of the most spectacular royal palaces of Jaipur, Rajasthan.