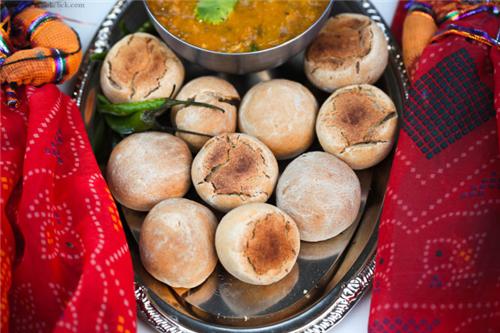 Jaipur is heaven for a foodie with choices like ghevar, laal maas and the king of Rajasthani food, Dal Bati Churma. Though Jaipur will serve you with the best of all the authentic dishes, there are some places that will give you mouthwatering dal bati churma, the flagship dish of Rajasthani cuisine.

Dal Bati Choorma comprises of three main ingredients, Dal(lentil), Bati (baked balls of wheat and usually stuffed) and Choorma (a sweet made of cereal crumbs). The dal is served with the bati and the churma.  The more ghee used in the recipe, the more scrumptious it tastes. There are lots of varieties available when it comes to batis, like plain bati, masala bati, missi bati, dry fruit bati, etc.
The bati is made out of flour, wheat, millet or a mix of wheat flour and maize, with lots and lots of ghee. Similarly, a lot of variety can also be found in the churma, the color of which is different depending on the ingredients used.

It is difficult to ascertain as to when exactly the daal bati churma was invested, this dish but there are two widely beived facts that speak about the history of the advent of daal bati churma in the Mewar culture.

It is believed that the war-like lifestyle of the Rajputs gave birth to daal bati churma. At times of war, armies faced a lot of adverse conditions due to which there arose the need for long lasting food. One of the most feasible ways, considering the Rajasthan’s barren land and insufficient water, was to bake wheat doughs in bulk.
This was a good choice as it could be cooked fast and in huge quantities so as to meet requirements of the entire army. These baked doughs of wheat were named bati, which later got two additions daal - a mix of lentils, and churma - sweetened cereal.

Meanwhile, there is another belief that the tribal clans of Rajasthan created the batis. The nomadic tribal people would keep doughs of wheat under the sand before leaving for work. The doughs would get baked because of the scorching heat of the sun on the sand until they returned.
Bati was a key resource of food for the tribal people as it was easy to make, cheap, healthy and durable. Daal bati churma has travelled a long way from the ancient times to five start hotels and high-end restaurants in the present. 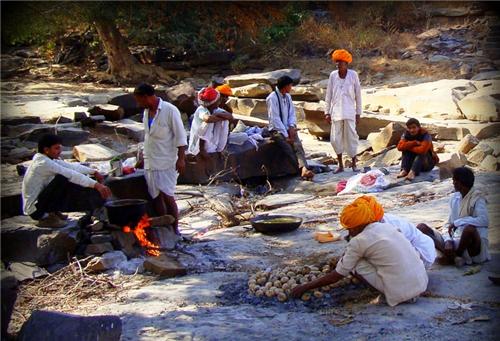