Albert Hall Museum is the oldest and finest museum found in the city of Jaipur. It is also called as Government Central Museum and is the state museum of the state of Rajasthan. It is situated in the Ram Nivas Garden in Jaipur.
The museum was constructed by the Maharaja Sawai Ram Singh II in 1868 during the visit of Prince of Wales and the museum is named after him. Though the Maharaja wanted the building to be town hall, but his successor wanted this to be a state Museum. 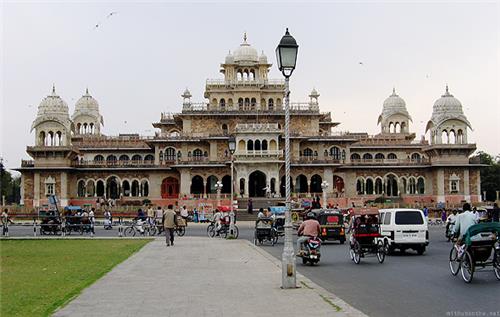 The museum comes with several courtyards, towers and archways which symbolizes the architectural heritage of India.  The museum also comes with several paintings that include many miniature paintings as well as portraits of royal kings and these are all found on the first floor of the museum. The museum also comes with metal artwork, carvings and huge jewellery that are made out of brass articles.
The museum is made out of Indo-Saracenic type of architecture and was designed based on the Victoria and Albert Museum of London.
The museum houses 19000 objects and has the collection of clay models, educational, scientific, zoological, sculptures tribal costumes, ceramics, oil and miniature paintings, inlay works, musical instruments, clocks and marble statues.
The museum was designed in honour of King Edward VII, Prince of Wales, who was visiting India. The central museum is renowned for its enormous as well as exclusive collection and is the major tourist attraction of Jaipur. The Mehndi Mandana is a must see gallery where the illustrious henna body art of Rajasthan is displayed.
Yet another gallery comes with puppets and phad paintings. The durbar hall comes with the largest covering of the world. The museum is opened on all days from 9.30 am to 4.30 p.m. except on Holy festival. Fridays are holiday for the museum.